Let’s not just talk about sustainability: let’s be sustainable,

on our own way and on a larger scale.

In the forthcoming winter edition of CARE’s, the theme of waste recovery – not only by small enterprises, but also and espacially by big companies – will be the focus of an event that has become synonymous with ethics and sustainability.

“An effort, albeit small, is always positive when a small company makes it, but when a bigger one changes, the change is more easily perceived, and CARE’s wants to be the first to speak out about it.” Paolo Ferretti, Mo-Food

This view is supported by the most eagerly-awaited guests of the CARE’s Talk in Alta Badia: from Oscar Farinetti, founder and creator of Eataly and FICO, to Stefania Lallai of Costa Cruises and Lara Gilmore of Food for Soul. These guests will star alongside the chef from Maido, winner of Latin America’s 50 Best Restaurants, and James P. McMahon and Matt Orlando, who are committed to cutting food waste through their own restaurants and projects.

Following the success of the previous two editions in Alta Badia and Salina, CARE’s is back, from 14 to 17 January 2018 in Alta Badia.
The event is expanding its activity with the presence of international chefs (35 from 14 countries and 4 continents), gastronomy professionals, journalists and entrepreneurs, who are all sensitive to ethical issues, which are being increasingly subscribed by the industry’s big players, too. An exchange of opinions about sustainability, territory development, environmental protection and, above all, ethics will once again prove an interesting opportunity for training and education over three days of events. And there will also be a series of new activities.

During 3 intense days of work, from 14 to 17 January, food will become the excuse to expand on a thought process and subscribe to a philosophy, in a world-exclusive setting framed by the beautiful peaks of Alta Badia. The hotels in San Cassiano, La Villa and Corvara will be the event’s “scattered location”. The prestigious Rosa Alpina Hotel will host the headquarters. Its restaurant, St. Hubertus, managed by Norbert Niederkofler, has just been presented with the “Sustainable restaurant of the year” award by “Le Guide dell’Espresso 2018”. There will also be a number of traditional up-high venues in the mountains, like the Piz Boè Alpine Lounge and – for the first time – the Luigi Gorza Refuge on Porta Vescovo, where guests will attend gala dinners, lunches up high, scenic excursions, cooking masterclasses (open to the public this time around) and, most importantly, the CARE’s Talks, which are the pivotal moment of the whole event.

Small entities such as restaurants were the stars of the previous conventions (contributions included the “working” sustainability of the Michelin-starred Relæ in Copenhagen or the “good kilometre” coined by Corrado Assenza for his patisserie Caffè Sicilia, in Noto). This time, however, the 2018 winter edition of CARE’s is shifting its focus to the large-scale, aiming to show how and why multinational companies – some of which have rightly decided to support CARE’s over the years – are also engaging in ethical and sustainable projects.

In this regard, on Tuesday 16 January, as part of the day dedicated to the CARE’s Talks, the new Partner Testimony format will give some of the main sponsors the opportunity to present their company’s contribution and ethical mission and to talk about why they support CARE’s.
Stone Island, which is hosting the press conference, will take advantage of that very occasion to present its own aim in terms of ethics and of the continuous research, reasons for which the Italian menswear brand will be back supporting CARE’s for the second time.

The CARE’s Talk:
Food and farming – sowing small seeds, reaping big benefits
Alongside small farmer Harald Gasser from Alto Adige will be the “great” Oscar Farinetti with his FICO project (Fabbrica Italiana COntadino or, literally, Italian Farming Factory) – the world’s largest agri-food theme park, with 100,000 m2 of Italian biodiversity – and Prof. Christian Fischer, course director of the degree programme in Agricultural and Agro-Environmental Sciences at the Free University of Bolzano.

Waste recovery and enhancement for a sustainable recycling
Food waste and possibilities for recovery will be another fundamental theme of CARE’s 2018, with an interview with Lara Gilmore from Food for Soul, a non-profit association committed to campaigning against food waste. The prestigious programme of stage appearances will be rounded off by an interview with chefs James P. McMahon (with the Food on the Edge project, a symposium in Galway, Ireland, on best practices in food culture) and Jan Hendrick, both engaged in projects to reduce food waste with their restaurants.
High-profile individuals will be speaking about reducing and recycling surplus food on a global scale: Stefania Lallai, Sustainability and P.R. Director at Costa Cruises, which has always promoted a sustainable business model with projects to reuse the food waste produced on its ships (in partnership with the non-profit association Fondazione Banco Alimentare ONLUS, which will be represented at the talk by a member of its top management, Marco Lucchini) and Michael Niederbacher of BTS Biogas, an Alto-Adige-based company which is the main builder of Biogas plants in Italy and pioneer of the sector for the production of renewable energy from surplus materials from animal farming and food production and wastewater from industrial and municipal purifying plants.

Culinary sessions
Culinary sessions, where sustainability will be demonstrated in the kitchen through ethical recipes, will be offered alongside the conventions. Four masterclass are scheduled to take place, and are open to the public this year, for the first time ever.
The first will revolve around cultural change: chefs Jock Zonfrillo from Aboriginal Australia, Mitsuharu Tsumura from the Maido restaurant in Peru and Vladimir Mukhin from Russia will use their principles of sustainable cooking to express their passion for the culture of their countries.
The second, dedicated to the theme of Mixology, will welcome Valeria Margherita Mosca, from Wooding, an upholder of foraging, as one of the guests. She will be mixing at the bar together with the chefs Giancarlo Morelli and Lorenzo Cogo.
The third will focus on Tradition. Chefs Thomaž Kavcic from Slovenia and Ivan & Sergei from Russia will be taking to the kitchen to recount the symbolic aspects of their traditions.
Lastly, the fourth will be a special masterclass dedicated to the ancient natural food preservation method of Fermentation.

The squad of international chefs will meet again in Alta Badia to discuss and share their different opinions on the theme of sustainability in their profession with their colleagues. It will be a pleasant experience for all, with lots of fun to be had too. People will be very much looking forward to seeing one chef in particular: Mitsuharu ‘Micha’ Tsumura, the chef from Maido in Lima, which has just been awarded as best restaurant by Latin America’s 50 Best Restaurants and, with him, Leonor Espinosa, Columbian chef from Bogotà of Leo Cocina y Cava, named Best Female Chef in South America and the founder of Funleo, a foundation safeguarding the oldest traditions of Columbian cuisine.

Awards
The much-awaited Awards ceremony is on the programme for this edition, too. It is sponsored by companies from various sectors, with a special focus on the Social Responsibility Award sponsored by Marchesi 1824. Voting via social media is new for this year: the candidates for the two awards Young Ethical Chefs sponsored by Monograno Felicetti and Young Ethical Hospitality sponsored by Ferrari Trento and Lavazza will be given the chance to post a short presentation video on Facebook and users will then be able to vote for them. 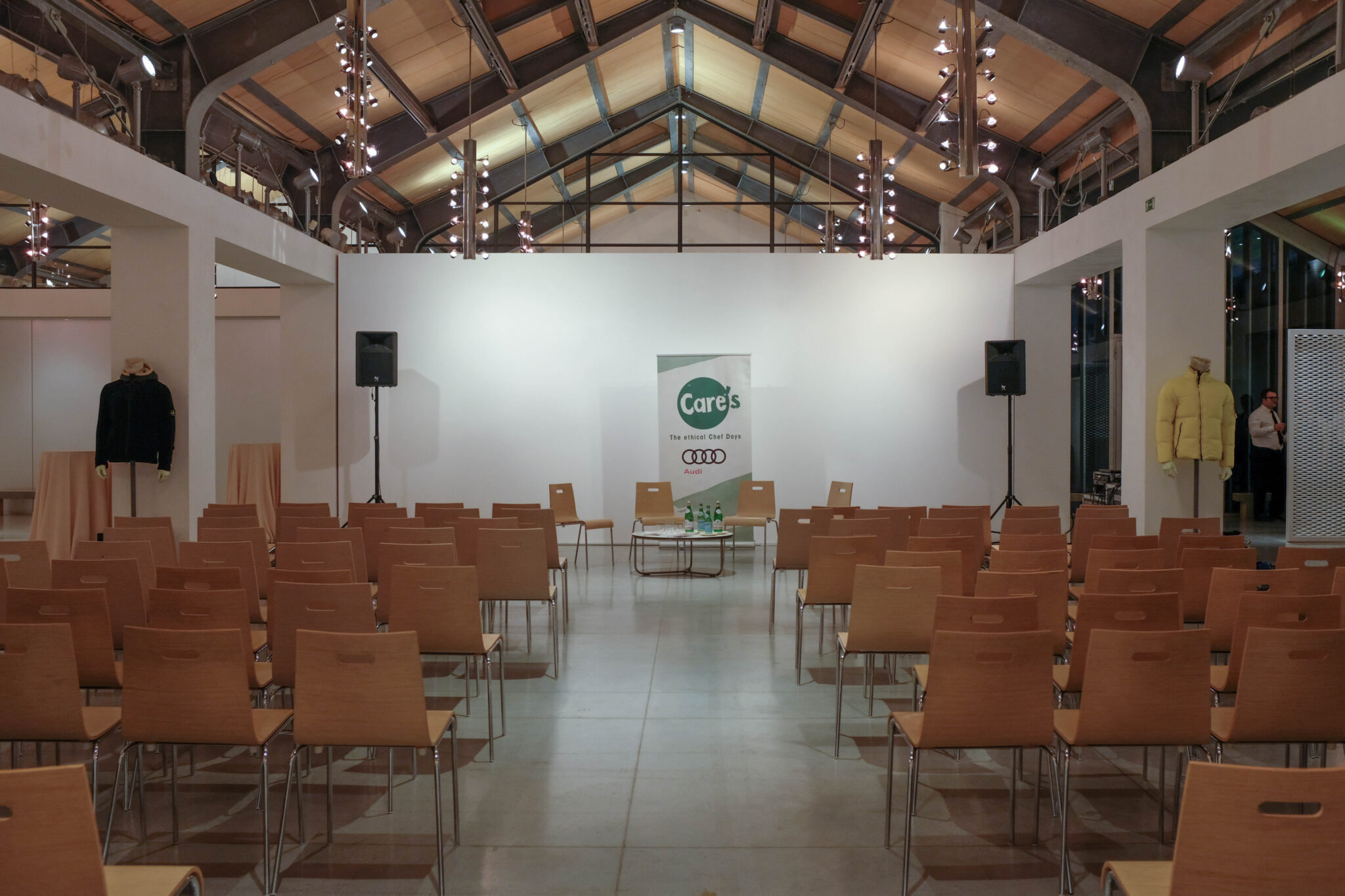