Throughout a continuously growing ethical awareness, Norbert Niederkofler, creator of this event, together with Paolo Ferretti, and leading voice of the “no-waste” concept re-confirms their beliefs: the ancient customs which taught to recycle ingredients and leftovers, such as fermentation, become more and more his guidelines in the kitchen.

A third of all food is un-used because of the excessive overuse by humans. For everybody there is one important task, to educate the young (beginning with the chefs) to always be more sensitive and ethically contemporary in personal choices.

This concept has been clearly outlined by the speakers of this year’s CARE’s Talks powered by Vodafone (the carrying force of the CARE’s winter edition 2018 in Alta Badia) last Tuesday 16th January at the Casa dla Cultura of La Villa. Various points of views have been expressed which led to an animated and up-to-date debate on the subject:

“Sustainability as a mission for the future, driven by a mutual example: the lessons given by grandmothers and mothers kitchens’, where the maximum yield of the few ingredients have been exploited to create a meal without leaving leftovers on the plate, because doing so would have been neither correct nor polite. It is in this way that the respect for food has been taught and passed on, in a period where ancient methods like fermentation (protagonist of the popular masterclass with the chefs Michele Lazzarini, Antonia Klugmann and Valeria Mosca, forager and researcher in the area of wild food) helped maintain food for longer. Basically, this is it what each of us needs to learn how to do – the chefs with their clients, who in turn pass it on to family and friends, for a sustainable and ethical virtuosity.”

This CARE’s edition has shown us how to find an opportunity for everyone, as well as an economic and social value on the subject of ethical practice from the kitchen to the way we eat out. This has been presented by small operators as well as by big companies with examples and suggestions, becoming thereby the carrying argument of an event, which by now has become synonym to ethics and sustainability. The attendees on Tuesday the 16th of January at the CARE’s Talks powered by Vodafone in Alta Badia, moderated by Lisa Casali, environmental scientist, blogger, writer, and one of the leaders in Italy when it comes to fighting against waste, have been – between many – Oscar Farinetti, founder and creator of Eataly and FICO, Maria Chiara Gadda with the namesake law nr. 166 against food waste, which has just entered into force; Lara Gilmore of Food for Soul with the outstanding project “Refettorio Ambrosiano” now ready to go around the world; Stefania Lallai from Costa Crociere together with Marco Lucchini, secretary general of the “Fondazione Banco Alimentare” which thanks to their collaboration have been able to transform excess food of cruise ships into charity goods, disembarking it in useful times for the consumption in the next port; complemented by the chefs JP McMahon (Aniar – Galway, Ireland), who with his small sustainable managed restaurant inspires other restaurants to be a driving force with clients when it comes to ethics, and who is paying a lot of attention at figures regarding waste that everyone produces when cooking at home; Mat Orlando (Amass – Copenhagen, Denmark) who has insisted on the fact that the term waste needs to be understood as excess in a positive way, committing to re-using and enhancing it; and Jan Hendrik van der Westhuizen (Jan – Nizza, Francia), who as South-African is working in France and has already internalized practices such as the use of seasonal and local ingredients (the buchu) united with practices that aim at saving water resources.

All the chefs who are engaged with their own restaurants and projects in reducing and subsequently valorising food waste, have animated the event with their positive messages and contributions, and have been putting into action their philosophy with the dishes that they prepared during the various lunches, dinners and masterclasses.

In a scene that is unique to the world, this year, under abundant amounts of snow, surrounded by the suggestive mountain peaks of Alta Badia, a squad of international chefs (39 of 14 nationalities and 4 continents), gastronomy professionals, journalists and entrepreneurs, have been animated for 3 days within their various appointments where confrontation on sustainability, territory development, environmental protection and, above all, ethics has one more time established the importance of CARE’s as an opportunity for exchange and education along with the entertainment and pleasure that high-level cuisine can offer.

In the prestigious Hotel Rosa Alpina with its restaurant St. Hubertus, guided by the leading force of Norbert Niederkofler (just assigned with the award “Ristorante Sostenibile dell’Anno” from “Le Guide dell’Espresso 2018” and the 3rd Michelin Star) there took place the welcome evening on Sunday the 14th of January and the concluding one on 17th of January with the customary exploration dinner. The mountain shelter, Piz Boé Alpine Lounge and for the first time the mountain shelter Luigi Gorza at Porta Vescovo, have been protagonist of two suggestive gastronomic evenings on high altitude; while the mountain shelters Moritzino and Las Vegas have hosted two exceptional lunches on the incredible slopes of the Alta Badia skiing complex.

Cooking and mixology masterclasses (this edition open to the public), experiencing the ladin cuisine and culture at Maso Runch, the exciting panoramic excursions with carriages towed by horses, in addition to the driving adventure with Audi, have been the moments that made CARE’s a sparkling moment for ideas and pleasant confrontations. A moment shared by companies and multinationals, Partner Testimonies that have been held in order to seek attention for a shared sustainable path.

At this point – it has to be remembered – that the mantra of this edition has been “An effort, albeit small, is always positive when a small company makes it, but when a bigger one changes, the change is more easily perceived, and CARE’s wants to be the first to speak out about it.” Paolo Ferretti, Mo-Food.

During the CARE’s Awards Dinner which took place on January 16th 2018, at 2478 meters above sea level, in the mountain shelter Luigi Gorza – Portavescovo at Arabba, the well-known CARE’s Awards have been assigned, which establish the commitment of CARE’s towards young generations and towards those who daily distinguish themselves for their social and ethical engagement in professional life.

This year Lorenzo Vecchia, class of 1992 coming from Pozzuolo Martesana, who personally grows his 6 gardens, has been awarded with the Young Ethical Chef Award sponsored by Monograno Felicetti. The Young Ethical Hospitality Award sponsored by Ferrari Trento has been given to Lorenzo Chiarugi (born in 1992) for his capabilities in the service demonstrated at his actual position as maître at the Osteria Gucci in Florence. Thanks to the support of Marchesi 1824 Giacomo Perletti and Matteo Trapletti have been awarded with the Social Responsibility Award.

Their young agricultural company Contrada Bricconi has been founded based on the recovery of the structures of a rural centre from 1500 in Valzurio (province of Bergamo); according to them “sustainability is made by humans and the beauty of places by farmers, because of this it has to be a lifestyle and the local people and local young chefs of the various places have to be enhanced.”

The awards made by Vetroricerca, a smelter in Bolzano, are totally in line with the ethical style of CARE’s – they have been made out of waste material coming from bottles of beer, wine and sparkling wines, which have been melted and cut in order to generate sculptures. “From glass there originates glass” is a slogan close to the values of CARE’s, such as recycling and environmental sustainability, which have marked this successful 2018 edition. Norbert Niederkofler himself stressed out several times that in order to create an ethical and sustainable cuisine, it is necessary to begin by respecting some crucial guidelines and the philosophy of producers, because at the centre of each choice there is the person with their actions. 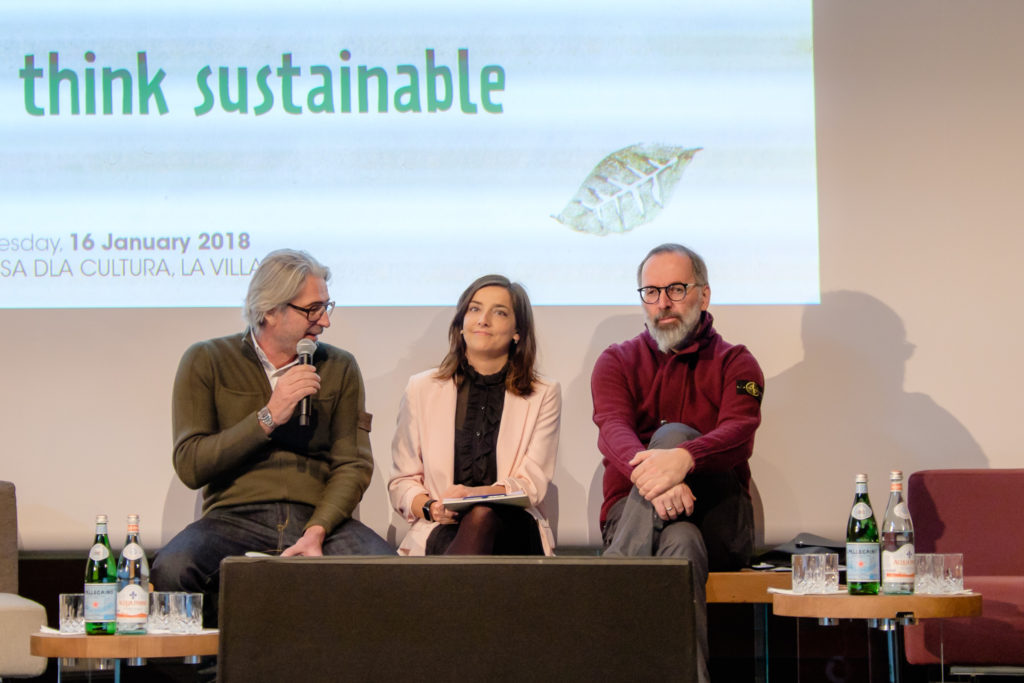 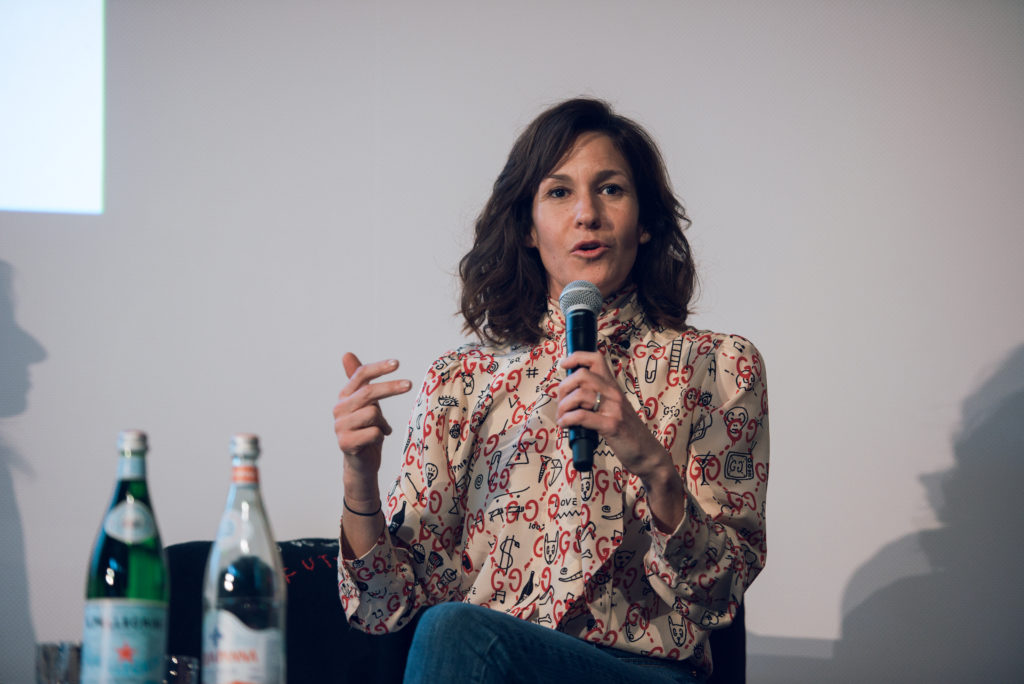 Lara Gilmore, founder together with Massimo Bottura of Food For Soul 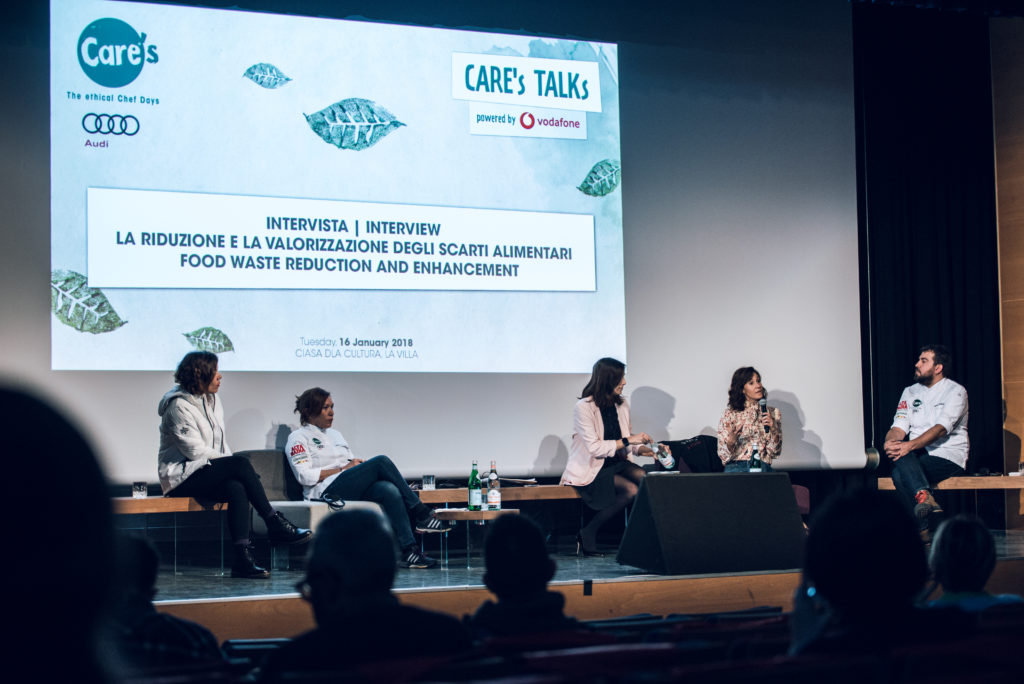 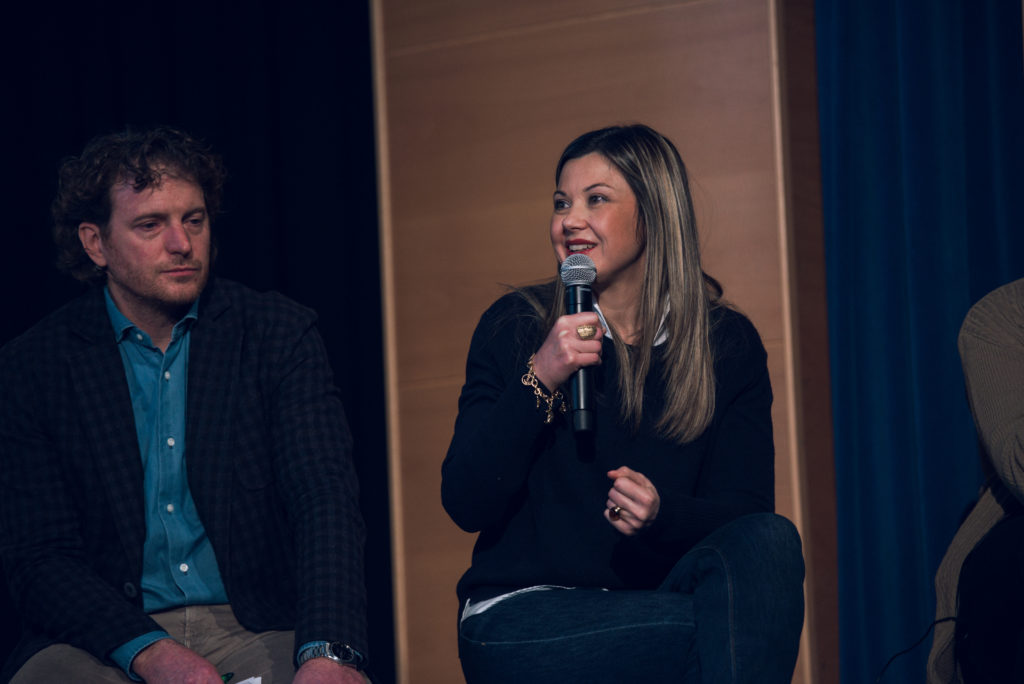 Maria Chiara Gadda, member of the Province of Varese, promoter of the “no waste” law 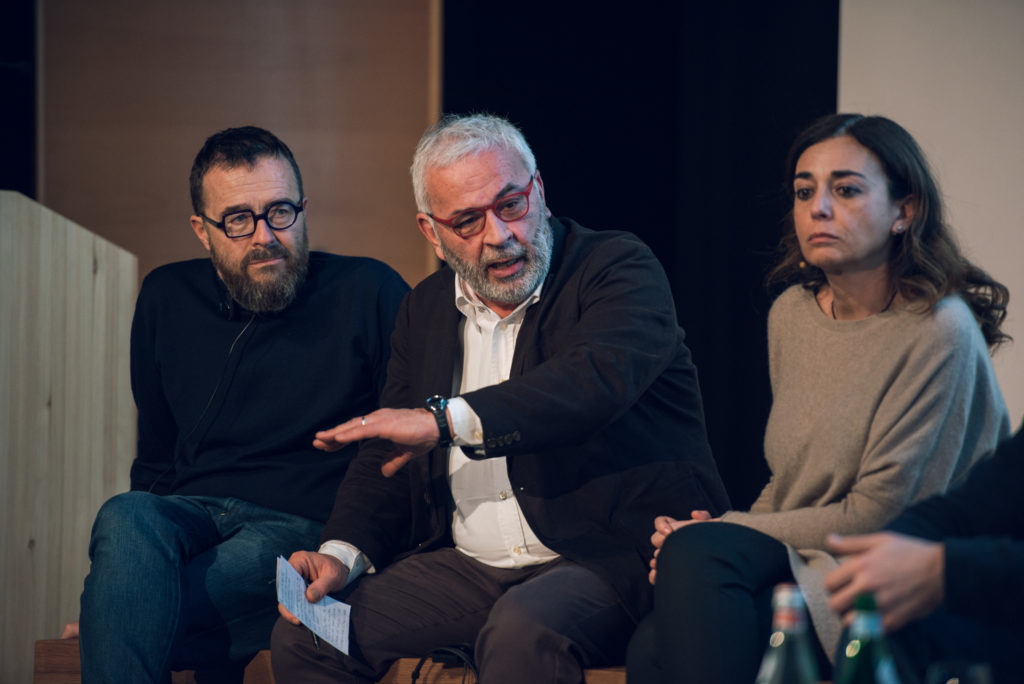 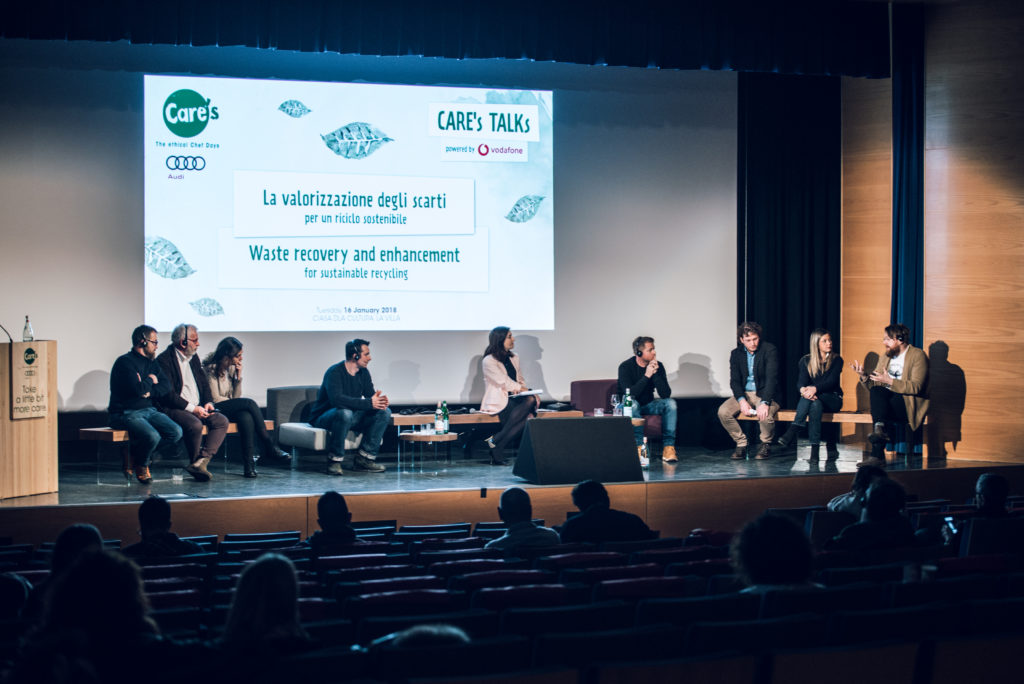 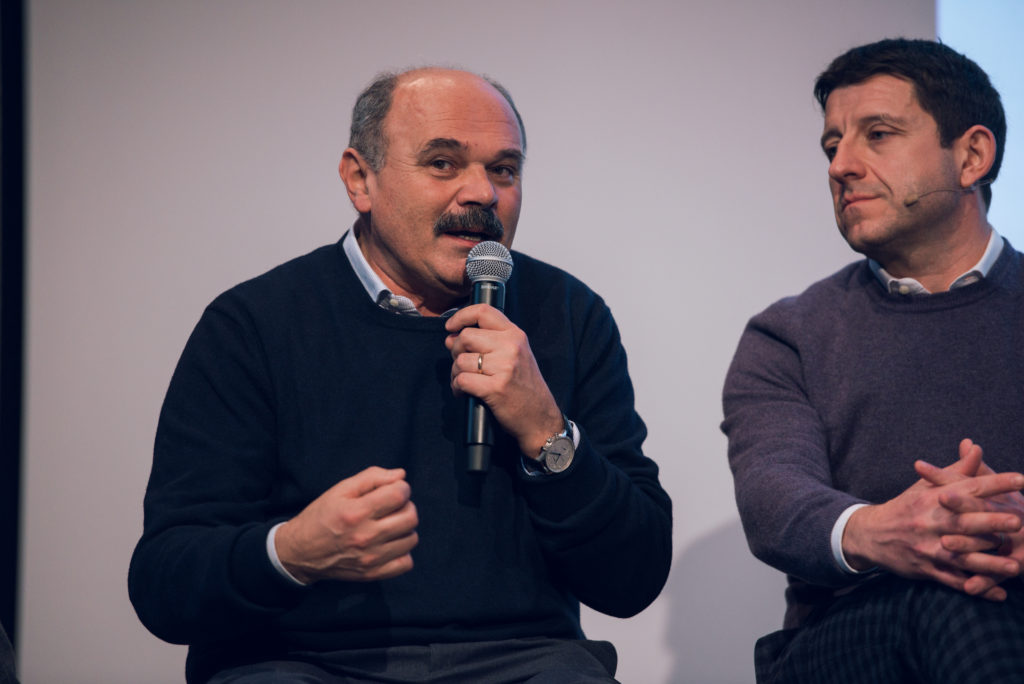