Norbert was born in 1961 in Lutago, a small town right in the heart of the Dolomites. His parents owned a hotel for the skiers in winter and climbers in summer, and he was always exploring the outdoors. Norbert loved the local wild berries, which were full of flavour thanks to the region’s volcanic soils, and the freshwater fish which could be caught from the rivers and streams. However, despite his love for South Tyrol, Norbert desired to see the rest of the world:

‘I wanted to become a Chef, so I could travel,’ he tells us. ‘I was tired of looking at mountains all the time, so I left the first chance I got.’

After finishing his studies at a culinary college in Germany, Norbert worked in London, Zurich and Milan, before arriving in Munich to work with Eckart Witzigmann, his greatest mentor. Eckart taught him how to respect nature and its produce to achieve culinary perfection. After seven years in Munich, he travelled to New York and learnt the secrets to innovation under restaurateur David Bouley. It was here that he truly began to develop his own style, but after a while he started to miss the mountains and flavours of his hometown.

In 1993, Norbert returned home to work at the Castel Colz in La Villa for a year, before being offered the chance to run the kitchen at Rosa Alpina Hotel & Spa in San Cassiano, at the base of the Dolomite mountains. At the time the restaurant was a pizzeria, but Norbert set about turning it into a fine dining establishment, using the cuisines of Austria and Italy as inspiration. He eventually decided to dedicate a small part of the restaurant to the local mountain range, refused to use ingredients produced outside of the Dolomites and named the restaurant St. Hubertus. News spread of this ‘Cook the Mountain’ philosophy, as it came to be known, and in 2000 the restaurant won its first Michelin star. Shortly after, the owner of the Hotel decided to close down the pizzeria and let Norbert have full control over the menu, which eventually led to a second star in 2007.

Norbert’s commitment to the Dolomites meant he had to research the area extensively and strike up close relationships with the region’s farmers and producers. He also had to start using more uncommon ingredients and try new things.
‘We use twenty-five different kinds of carrots throughout the year and an almost endless variety of herbs including amaranth leaves, sorrel, wild onion and celeriac,’ he explains. ‘The most natural ingredients are the most important.’

Food isn’t the only thing Norbert does differently – his approach to running a kitchen and managing his team of chefs is unique, too. He prefers to let them discover their own talents and styles of cooking, encouraging original thinking
and staying away from rigorously implemented rules.

I am like a football manager in the kitchen,’ he says. ‘I know what I’m looking for, and my job is to help guide the team to the same conclusion.’ 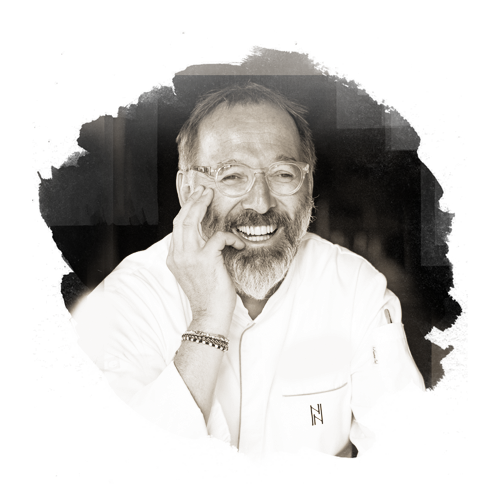